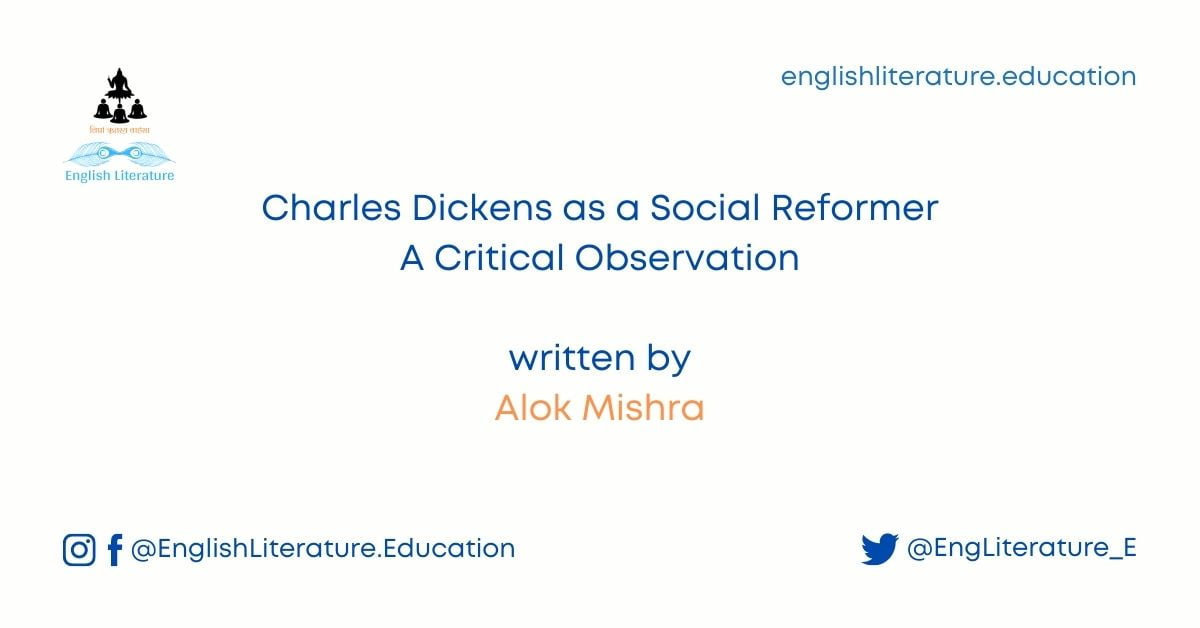 Charles Dickens remains a widely-read, famous, and dearly-loved novelist even today. Born in 1812, Charles John Huffam Dickens wrote many novels in his lifetime. Many of his works are still bestsellers. Hard Times, The Old Curiosity Shop, A Tale of Two Cities, Oliver Twist, Bleak House, Great Expectations and Our Mutual Friend are a few of his novels (popular).

Many authors in the past have raised grave issues through their literary works. In English literature, social issues find their way into the works of William Blake, Charles Dickens, Alexander Pope, Shakespeare, Ben Jonson, Jane Austen, Thomas Hardy, D. H. Lawrence and T. S. Eliot (mainly), including many others. Among the ones named above, Charles Dickens reserves the lion’s share of appreciation on his side! Dickens highlighted many social problems in his novels. There are many instances to cite.

Many critics believe that Charles Dickens was a social reformer (serving his purpose through his writings). As a writer, his work often addressed and critiqued the social issues of his time. Through his novels, he brought attention to the plight of the poor and working classes and the harsh realities of life for many people in Victorian England. Victorian English society witnessed the divide between the rich and the poor in its prime! The distinction between haves and have-nots got its (seal of) approval in this society.

One of the ways in which Dickens helped society was by bringing these issues to the forefront of public discourse. His novels were widely read and popular. They sparked debates and discussions about the social and economic inequalities of the time. In Hard Times, there are two sets of characters – one with wealthy protagonists and another with poor ones. Louisa, Thomas, Tom, Bounderby, and Harthouse are those affluent ones with influence who can do anything. Sissy Jupe, Stephen Blackpool, Rachael and Mrs Sparsit are poor. They work hard to make both ends meet. Tom dumps the allegation of bank robbery on Blackpool. Sissy remains an intellectual punching bag for Gradgrind for a long time. Sparsit cannot have direct questions (given the circumstances), but Bounderby does use her for his leisure. A conspicuous case of social exploitation finds a grim reflection in Hard Times by Dickens!

Hard Times: In “Hard Times,” Dickens uses the character of Thomas Gradgrind, a hard-headed, utilitarian schoolmaster, to represent the narrow-minded and heartless approach to education and social policy that he saw as prevalent in Victorian England. Gradgrind is a proponent of “fact, fact, fact,” and believes that the only way to educate children is to teach them practical, resourceful knowledge rather than encouraging them to think creatively or to appreciate the arts.

Overall, “Hard Times” is a commentary on the social and economic issues of Dickens’ time and reflects his belief that society should be more concerned with the well-being and happiness of its members rather than simply maximizing efficiency and productivity.

Oliver Twist: The novel tells the story of Oliver, a poor orphan mistreated and neglected in a workhouse, and his eventual escape from poverty and abuse. Once again, the core theme of “Oliver Twist” is the social realities of poverty and the mistreatment of the poor in Victorian England. The character of Oliver, the protagonist, and the other characters in the novel, Dickens portrays the harsh realities of life for many people in 19th-century England, including the lack of access to necessary education, the poor living and working conditions, and the lack of support and resources available to those in need. The novelist also hints at the lack of empathy in society.

In “Oliver Twist,” Dickens forcefully critiques the workhouse system designed to provide relief to the poor but often ended up being a place of neglect and abuse (and exploitation). He hints that the workhouses had poor management and that the poor who stayed there received little compassion or humanity. In short, the whole sham was an antithesis of the concept!

“Oliver Twist” is a realistic, impressive and genuine commentary on the social realities of Dickens’ time and a call for social reform. Through this novel, Dickens sought to raise awareness of the plight of the poor and to inspire readers to work towards creating a more just and compassionate society.

Bleak House: Like the above two, Bleak House is a social commentary that deals with a wide range of social and political issues of the time, including the legal system, public health, and the plight of the poor. Dickens raises many administrative failures and prevalent corruption in this work. One of the main themes of “Bleak House” is the inefficiency and corruption of the legal system in Victorian England. Through the character of John Jarndyce, messed up in a long-running and ultimately futile legal case, Dickens portrays how affluents could use the legal apparatus to exploit and oppress individuals, and he calls for reform of the system.

Another theme of “Bleak House” is the issue of public health, particularly the devastating impact of cholera on the poor (in the Victorian period). Dickens uses the character of Mr Krook, who dies of cholera, to highlight how the disease disproportionately affected the poor and to call for improvements in public health infrastructure and policies. Dickens’ novels mainly reached middle-class households. And it helped him (and inspired him) to raise issues of public importance! “Bleak House” did the same.

The Old Curiosity Shop: The Old Curiosity Shop, written by Charles Dickens, is a novel that reflects the social realities of Victorian England. The Industrial Revolution changed many established truths in the lives of many. This novel discusses the life of a young girl named Little Nell and her grandfather, who owns an old curiosity shop. Set in the early 19th century, a time of the ‘great’ social change in England, in “The Old Curiosity Shop,” Dickens portrays the harsh realities of life for the working poor. The main characters, Little Nell and her grandfather struggle to make ends meet amid constant financial difficulties. The novel also highlights the widespread poverty and social inequality that existed in Victorian England, as well as the harsh and unforgiving nature of the society. Poverty and greed, the unsettling impact of massive industrialisation on the poor, and the increasing divide between the affluent and the labourers linger throughout this novel full of pathos.

A Tale of Two Cities: Though this novel remains a forever classic for many other reasons, Dickens used this one (as well) as a medium to bring to the fore a few social concerns. One of the dominant social problems highlighted in “A Tale of Two Cities” is the inequality and injustice that existed in Paris and London at the time of the French Revolution. Perhaps, unlike those prominent figures in the Romantic Age in the history of English literature, Dickens was one the few literary personalities who tried to highlight the seamy side of a much-appreciated phenomenon in world history! He throws the torch with the light of realism on the dark chapters of the French Revolution. “A Tale of Two Cities” brings the brutality and violence of the French Revolution to light. Dickens portrays how the Revolution turned ordinary people into bloodthirsty mobs, and he suggests that the violence and terror of the Revolution were ultimately self-defeating and destructive.

Dickens also portrays how the ruling class in both cities was out of touch with the plight of the poor and oppressed and suggests that this inequality was a major contributing factor to the revolutionary fervour sweeping France at the time.

Literature has traditionally served as the mirror of society. Nevertheless, with time, this mirror may have developed stains and corrosion or broken from here and there. Is literature today capable like it was yesterday? Can literature mirror society now? Can it guide the masses with visionary ideas?

Dickens was the representative of his time. As a novelist, he tried to tell fantastic stories (as others do). However, in addition to telling stories, Dickens chose not to ignore the problems in society. The characters Dickens created in his novels come with traits he observed in the world around him. Realism, we all know, is the first stepping stone that any ‘serious’ novelist has to cross.

Dickens was born into a poor family and did not have a childhood with money to spare for his hobbies. He spent his childhood reading Tobias George Smollett and Fielding. He determined during a visit to Manchester to do whatever he could to serve the cause of the poor. (Adams 2009: 82-3) Troubled by the experiences from his past, observations of social realities, and the urge to do something for those who suffered, Dickens may have decided to use literature as the medium to voice for the voiceless in the age of unchecked industrialisation. And as a responsible literary personality, Dickens brought the case of the ignored, sidelined, exploited and hopeless in the court of the masses through his writings.

Dickens played his part as a novelist-realist who did not trade his conscience for partial relief from personal sorrows. He raised awareness about social evils not only through his novels but also through the newspapers he established and edited. Let me conclude this attempt by quoting the genius literary critic, David Daiches.

“… let us remember that he did awaken the Victorian conscience on a great variety of subjects, from debtors’ prisons to private schools, and that as a novelist he possessed a combination of gifts unknown among English novelists before or since. He had that joy in the varieties of human character that Chaucer and Shakespeare had, and to a degree shared by none but those; he had both a richness of pure comic invention and an extraordinary gift for irony and caricature; he had a pressing sense of the moral and social problems of his day and the genius to illuminate them through the presentation of character in action; and always and invariably he entertained.”
(Critical History 1996: 1058)

Posted on 2 months ago
Read more by tags:
#Academic#Novelists#Victorian