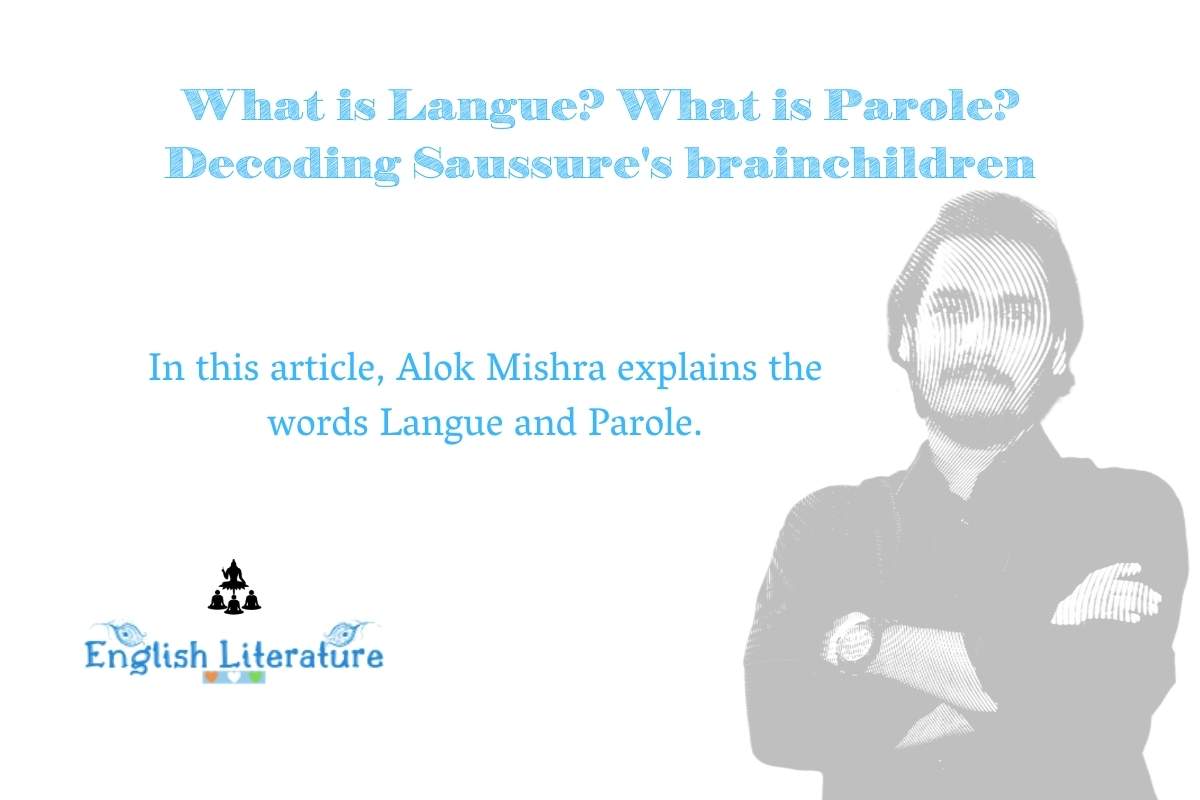 This article explains the words Langue and Parole. Langue and Parole are popular among students of English literature, literary theory in particular. This article has many parts. You may read it thoroughly to understand the terms in their broader context (to borrow Saussure’s nuclear idea). Alternatively, you can read the sections that interest you. Ask your questions in the comment section (if you have any).

Langue and Parole:
I always rely on the expertise of Peter Barry. He is dexterous in transforming the complex jargon into simple ideas anyone can grasp. On page number 43 of his touted book, Beginning Theory, he simplifies the complicated terms Langue and Parole for the beginners. I will further simplify these terms so that anyone can understand them.

Langue: By Langue, Saussure meant the language (any) as a system or the grand structure that is complete and independent.

Parole: By Parole, Ferdinand de Saussure indicated the use of language by us. Parole is always dependent on Langue.

Example: Suppose someone listens to a word in Hindi. That someone does not know Hindi. Hindi as a Langue (the grand structure) remains intact someone knows it or not. However, someone from our example will have to depend on Hindi as a Langue to be able to use it (Parole).

Now that you understand these words, know the origin:
These two words have become famous. Even those who do not know the person behind these two daunting words are worried and anxious to sail across. It is natural, I will say. Ferdinand de Saussure (the person responsible for headaches to the literary fraternity with these popular terms) coined these two terms in his lectures on General Linguistics that he delivered to the students of the University of Geneva (1906-11). Unfortunately, before he could witness the compilation of his lectures in the form of a book, Cours de linguistique générale (Course in General Linguistics), in 1916, he died in 1913.

Langue and Parole in Structuralism:
Saussure did not use his inventions to distinct literary works. He did not mean any harm to the literature of his time. The leaders of the School of Structuralism (in the periphery of literature) have used (read abused) the inventions of Saussure to extradite the works of literature to the strange world. Why did I say so? Let me explain. Using the Langue-Parole analogy, critics posit the individual pieces of literature against the entire cultural, religious, mythological, historical and any other context matching the particular work. For example, let’s discuss the work The Fall of Hyperion by John Keats. To understand the poem beyond rhyme and lyrical embellishments John Keats used, a reader will have to learn about Greek mythology. Who was Hyperion? Who were the Titans? Is Hyperion a God? Unless one knows the answers to these questions, the poem by Keats won’t make any sense. In this case, The Fall of Hyperion is Parole, and Greek Mythology is the Langue.

Key-persons:
Claude Lévi-Strauss: An anthropologist who suggested the methodology to interpret individual tales from the body of myths in a broader context and a sequence. The isolated study, Strauss believed, didn’t make any sense. It opened the gateway to Narratology, a related School of Literary Theory.

How did Saussure use these words in his lectures?
Quoting an extract from the brilliantly translated edition of Saussure’s courses by Roy Harris:

And translating the part that defines Langue in the words of Ferdinand, the same translator, Roy, writes:

“A language as a structured system, on the contrary, is both a self-contained whole and a principle of classification. ”

And thus, by Parole, the linguist meant to define the human use of the Langue.

Further Connotations:
The concern here is that the Langue is a construct of many things. Social, cultural, civilisational, religious, regional, national, international… Langue is a vast body that stays constant in one way and keeps gaining weight as well. On the other hand, Parole is purely individual. It will not make sense unless you put in a larger context, in contact with this superstructure Saussure calls Langue. Saussure’s posthumous publication also suggests that Parole is arbitrary. How? Let’s see!

Morning: the standard time when we wake up after the night’s sleep

So, by arbitrary, Saussure hints that we do not ascribe words to physical objects or actual conditions. We invent words to differentiate a situation from another to have a distinct perspective.

The Confusions:
Scholars point out various instances of confusion in understanding these two words. They also believe that is because Saussure could not complete his series of lectures. After his untimely demise, editors published the compilation of the lectures Saussure delivered between 1906-1911 as a book. Roy Harris, in the Bloomsbury edition of Saussure’s work (2013), raises doubts on several occasions on the interpretations and editorial changes by the editors who published Course in General Linguistics for the first time in 1916. It is also an important fact that one should note – Saussure’s posthumous publication was the compilation of ‘notes’ by the students who attended the lectures he delivered. Do you see the dilemma? We are not sure of the Langue and Parole here!

*Note: Hans Bertens informs in his book that Saussure did not use the term structure. He used a system of signs. (Literary Theory: The Basics 49).

What to do next?
You are here because of your interest in Structuralism, I believe. If you want to read about Structuralism in detail, you can click the link below:

If you want to read other articles about literary theory, here are the ones you might like:

What is literary theory?

Difference between theory and criticism

Posted on 8 months ago
Read more by tags: #LiteraryTheory 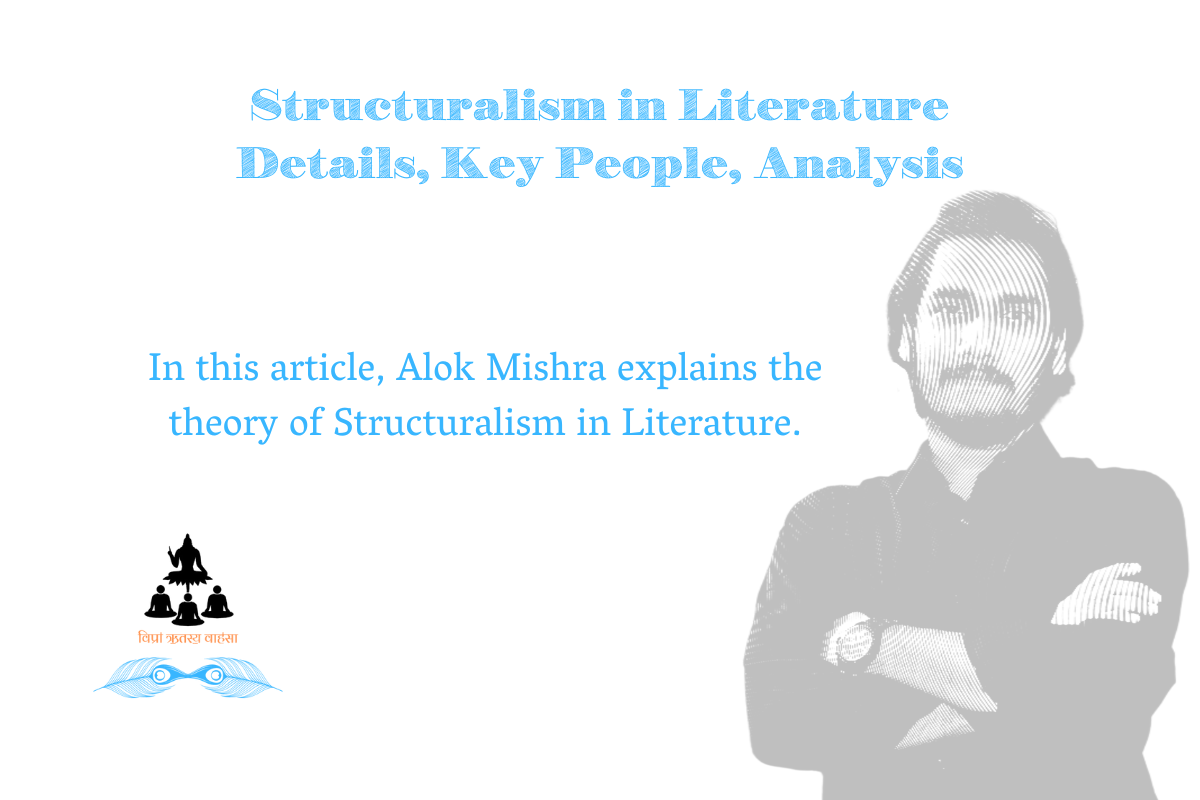