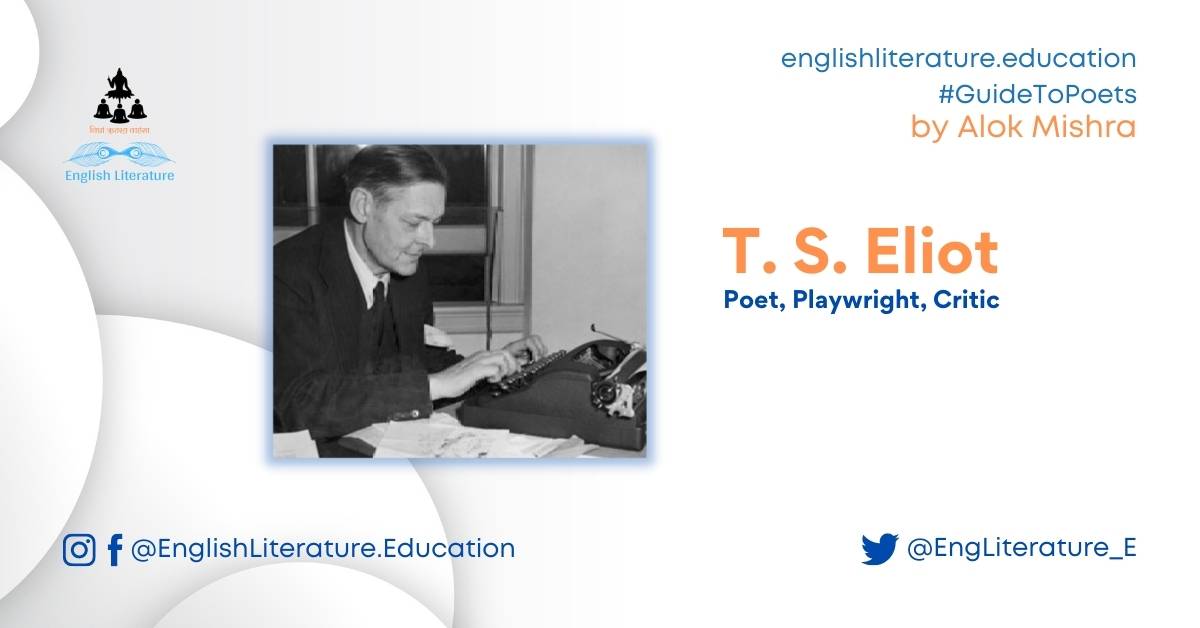 On this page, you will get details about T. S. Eliot. The 20th-century poet known for his poetry, plays and critical insight, Eliot’s talent as a writer remains unmatched in the world of literature. We have tried to cover Eliot’s biographical sketch and critical analysis as a poet, a dramatist, and an intellectual giant. Links to specific articles are at the end of this brief introduction. You can request more essays on particular poems, plays, and aspects of T. S. Eliot’s poetry and criticism. We will try to cover those in future. Happy reading! All the best!

T. S. Eliot was a British-American poet, playwright, and literary critic who was one of the leading figures of the modernist movement in the early 20th century. He is best known for his poems The Love Song of J. Alfred Prufrock, The Waste Land, and Four Quartets. In his literary output, Eliot often explored themes of modernity, alienation, and spiritual and intellectual disillusionment. After the publication of The Waste Land in 1922, Eliot became a curious subject for literary figures, critics, and students of literature. Eliot was also a highly influential literary critic. His essays on poetry and literature had a significant impact on the development of modernist aesthetics. His critical insights are still famous in literature circles. Literary and cultural references and allusions, fragmented and disjointed structure in his poems, and themes of spiritual awakening and the search for meaning (existential and otherwise) in a modern world that often seems disconnected and meaningless are the essential features of Eliot’s writings.

He married Vivienne Haigh-Wood on 26 June 1915. This marriage, however, proved troublesome for both, Eliot and Vivienne. The entry of Bertrand Russell into their lives made things further complicated (as noted by a few biographers and scholars).

Eliot studied Sanskrit, Indian philosophy, and other ancient literature extensively. He also appreciated Baudelaire and Jules Laforgue for their use of symbolism in French poetry. Eliot studied poets and authors before him, appreciated a few and criticised a few in the early youth of his critical writing. However, he changed his opinions later (when hit by wisdom as he aged).

Please note that I have only mentioned the works widely popular and appreciated by critics and scholars of literature.

Eliot introduced to the world the ‘free style’ poetry that followed no form, no pattern and no rules (that ruled the poetry of the classical, formal, and neo-classical ages). Even without armours of lyrics, rhythm, forms and music, Eliot’s poetry appealed to the masses because it set ablaze the beacon that unsettled the world of readers. While The Love Song of J Alfred Prufrock introduced to the world a man that knew not how to initiate anything meaningful, it also reflected the tattered, battered, scattered and flattened soul of humankind after the absurd devastation of the first World War. Eliot wrote poetry that brings disillusionment, confusion, chaos within, conundrum, quandary, interminable quest, questions to oneself, decay, downfall and degeneration, and debacle. However, he also discussed hope, the path to satisfaction, enlightenment, and peace by following the ancient wisdom – shanti, shanti, shanti!

As a playwright, T. S. Eliot mostly wavered on the path of spiritual quests, tragic realisations, moral subversion and existential dilemma. His plays, the popular ones, were tragedies (literary success). Murder in the Cathedral and The Family Reunion are famous plays, one for its verse and another for the depth of existential and spiritual quests that Eliot could touch. Overall, Eliot’s plays are notable for their use of verse and their exploration of themes of religious faith. His plays, to be honest, could not come out of the shadow of his poetry.

Eliot’s claims as a literary critic in the 20th century, and possibly for a few more centuries, remain solid. Indubitably, T. S. Eliot was one of the most influential literary critics of his time, before and after. His popularity rests on the results of his ‘close-readings’ of literary texts, appreciation and criticism of other literary figures, and a few peculiar theories like impersonal poetry and objective correlative.

Posted on 1 month ago
Read more by tags:
#20th_Century#Poets